“The firm's victory in the [Transport Investor of the Year, Europe] category proves an asset doesn't need to facilitate movement to be transport,” PEI wrote. “KKR, which had a busy 2017 across the dealmaking and fundraising fronts, took the crown for our debut award [for Telecoms and Broadband Investor of the Year, Global] thanks to two crunch deals clinched in the first half of 2017,” referring to our transactions in Telxius and Bharti Airtel.

Raj Agrawal, Member & Global Co–Head of Infrastructure, said of the awards, “We are proud to be recognized by Infrastructure Investor and receive these awards voted on by our peers in the industry. Both of these awards are true reflections of the depth, breadth and one–firm approach at KKR, as these transactions would not have been possible without the involvement and support from teams including Infrastructure, Capital Markets, Public Affairs and Business Operations. We look forward to building on this momentum in 2018 and beyond.” 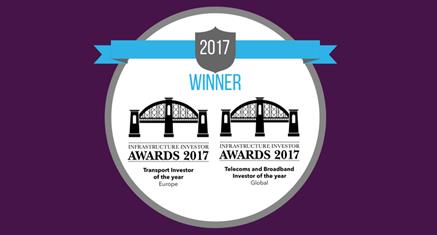